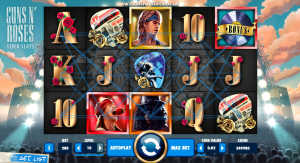 NetEnt has released a brand new slot machine on 21st of January, called Guns N' Roses slot machine. The name might be similar-now we are going to talk about the famous hard rock band and the online slot machine which is about Guns N' Roses. So this American hard rock band was formed in the '80s. The original lineup which players can meet during playing consisted the vocalist Axl Rose, lead guitarist Slash, bassist Duff McKagan, drummer Steven Adler and rhythm guitarist Izzy Stradlin. They sold more than 100 million records worldwide. Their songs are probably immortal and everyone have heard some of their famous hits, for example Welcome to the Jungle, Estranged or November Rain.

Thanks to the developers, we can even listen to their biggest hits because there is a SET LIST where anyone can choose the favourite background music. The following songs are available to choose from: Welcome to the Jungle, Sweet Child O'Mine, Paradise City, November Rain and Chinese Democracy. This is a very unique feature because other slot machines don't offer these choices. What else could you need to have so much fun while playing? Which one will you choose?

Whether you are a fan of Guns N' Roses or not, you will surely love this slot machine. So many players around the world have been very excited before its release. We can understand why-Guns N' Roses slot machine is as wild as the band itself! After 30 years of success, now you have to chance of playing this amazing hard rock band's themes slot machine online. All symbols and sound effects are clearly telling you that Guns N' Roses slot could be your next favourite for a long time. This slot machine has 5 reels, 3 rows and 20 lines and it's full of exciting and very entertaining features. Let's talk about the features.

There is a solo multiplier feature and when it's activated, you will be surely glad: you will receive a 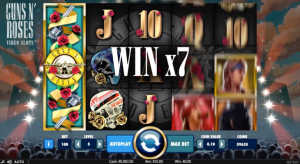 multiplier from X4 to X10. What's more, it's randomly selected so you will be excited for sure! The Solo multiplier will be activated if you can see at least three matching symbols on a bet line. However, this feature can't be activated if Appetite for Destruction Wild or Legend Spins are already active. Next, another great feature is Legend Spins: activates randomly and gives you 1 Stacked Wild symbol for the first spin.

On the first spin, the third reel is the Stacked Wild Reel. On the second, the first and fifth reels will be the Stacked ones. On the last spin, the second and fourth reels are Stacked reels. What is a Stacked Wild? It's a Wild symbol that covers three positions on the reel. Remember, when the same member appears on other reels but it won't be counted as a Wild or a Stacked Wild. Then, you can get 2 re-spins with not only one but 2 Stacked Wild reels. Another important thing is that bonuses will not appear during this feature.

Further more, Appetite for Destruction Wild is a cross-shaped Wild which can land randomly-fully or partially displayed on the third reel. It substitutes for all symbols except Bonus symbols.Did you know that Guns N' Roses slot has Bonus features? Well, when 3 Bonus symbols appear anywhere on the first, third and fifth reels in the main game, you will be awarded randomly with one of these awesome features: Crowd-pleaser Bonus, Encore Free Spins or coin win. Before this feature starts, a huge Bonus Wheel appears and and starts spinning. Isn't it exciting? 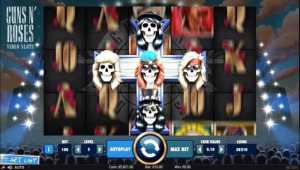 Encore Free Spins will activate 10 free spins. During these spins, one of the band members-who is the Wild-will appear and on reels 2, 3, or 4 in each spins. The maximum coin win is 800 and the minimum is 200.
Last but not least, the Crowd-pleaser bonus game is a mini game with 3 levels. You will have a number of picks which award coin wins. On the first level, 20-40, on the second level, 40-100 and on the third level, 60-200 coins can be won. In addition, this coin win will be multiplied by the bet level that you played. Free Spin symbols and a +1 Pick symbol can appear randomly as well. 3 Free Spin symbols activate 10 Encore Free Spins during Crowd-Pleaser Bonus Game.

Play Guns N' Roses slot machine now for real money to make it more exciting! Place your bets and prepare for the fun. This slot machine is very popular and trending so be one of those players who try their luck with this amazing slot machine! Your chances to win is very high, you won't be disappointed for sure. However, if you wish to play only for fun, you have the opportunity, of course. We highly recommend this online slot machine everyone who wants some excitement while playing this great game. Huge prizes are waiting for you so launch Guns N' Roses slot now!

Theme Park: Tickets of Fortune will amuse you

July 19, 2016, No Comments on Theme Park: Tickets of Fortune will amuse you