Every casino players wonder at least once about what would it be like if they won the jackpot. Many of them already know how they would spend the huge amount of money. Planning on buying a new car, a boat or a house? Travelling around the world with a beloved friend or family? Does not matter which slot machine they think of-this always keeps the players excited. Playing on handheld devices or PC? Both ways guarantee a fun and joyful game. When they start spinning the reels, the waiting begins for the best combination to land. It is a very thrilling moment, isn't it?

All players have the same feelings, they hope for the best. It is great because anything could happen. Maybe the next round will bring no winning combination. The exact opposite of that might happen, too. What are YOUR plans and dreams? We are sure you have some ideas!

Well, let us go back to the Joker Millions slot. We do not know what Chris, an online casino player thought on July 11, 2016. He probably just wanted to spend some spare time while waiting for his girlfriend in Oslo. This was the best decision of his life for sure. With his LeoVegas account, he decided to play Joker Millions on his smartphone. After a few rounds, he won the incredible €2,881,257 progressive jackpot prize! His life has changed instantly for the better. Would you like to be the next winner? But wait, here are a few things you should know about Joker Millions if this is your first time hearing from this slot machine.

First of all, it is a popular slot which is made by Yggdrasil Gaming. The game was released in 2015 so it is a quite new game. As mentioned before, Joker Millions has a progressive jackpot and this is great news for the enthusiastic players. The more number of players, the higher the possible jackpot prize-that is how it works. It is that easy! With only a little amount of deposit, you already have the chance of winning some great prizes.

You might think for a few seconds that it is nearly impossible to get the jackpot. Well, since its debut, Joker Millions paid out three amazing jackpots. The latest win is the highest so far. Congratulations, Chris! Well done! This slot machine has a lot to offer: the "freeze and re-spin" feature, sticky wilds, etc. Joker Millions come along with 5 reels, 25 lines and it is ready to serve its precious players.

Watch the video again, you might have the same screen soon! Good luck with that!The jackpot winner's story gives hope for everyone. We recommend this game for those who want to experience excitement, happiness and success. Try Joker Millions online slot when you have some time to spend, enjoy the game the fullest; your life may change in a few minutes! 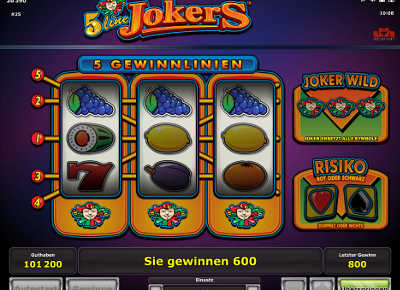