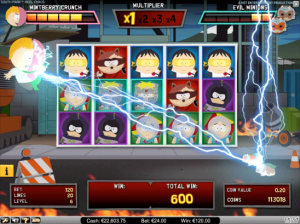 Those who liked the previous South Park slot machine, we are 100% sure they will have a new favourite the South Park Reel Chaos slot machine. We can state this because we know that like the previous South Park slot, the South Park Reel Chaos slot is very exciting. On one hand, this is because it has many extra games which activate randomly like the MINTBERRY EPIC BONUS feature and the Wild symbol sustitutes. Many casino players know that the more the feature, the bigger the chance to win.

However, the South Park Reel Chaos, unlike other slot machines, does not have a free spin feature. Instead, it has a bonus game, MINTBERRY EPIC BONUS feature with gradual winning. This activates when the BONUS symbol appears on the first, middle and last reels. If we could make it, we are in a house where enemies are waiting for us on every level. Till we'll be awarded with a winning, the enemy's health is decreasing. If we could defeat the enemy, we can go to the next level. However, if we don't have a winning spin, the enemy attacks and our health will decrease.

The aim is obvious, to reach to the highest level, because there are bigger prizes. It's a fact, this is not a free spin feature on the South Park Reel Chaos slot machine, yet it offers an amusing bonus game like the previous version.If a player can't get the bonus game, there is no need to worry, because the extra features can help during the fight. For example, there is a feature which can replace one or more reels into Wilds. It's not a secret that it can be a big help. The point is that any online slot machine can offer an entertaining game for those who are courageous and sometimes try their luck with higher bets.