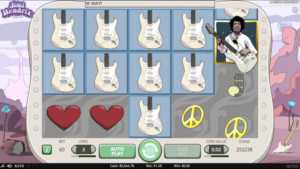 Jimi Hendrix was a remarkable icon in the history of popular music. He is still an influence on many artists. Despite his short career, his work is truly unforgettable. He was a singer, rock guitarist and songwriter. There's no one in this planet who wouldn't know at least one of his songs. For instance, Hey Joe, Purple Haze or Little Wings-rings a bell? Now you have the chance to learn from him while enjoying his music. He was inseparable from his guitar. So will you from Jimi Hendrix Online Slot since this game is awesome and has many great features.

If you decide playing Jimi Hendrix Online Slot, we recommend turning up the speakers. This game was developed by NetEnt so you can be sure your choice was good. It has 5 reels, 3 rows and 20 fixed lines. This slot can be played on various bet levels, from 1 to 10. Even the coin value can be changed. If you want, use the Autoplay feature where you don't need to bother with clicking on the button to launch the reels.

But now let's talk about the amazing features of Jimi Hendrix Online Slot. First of all, the Purple Haze feature which can be activated in the main game. When Jimi itself appears with his guitar actually in a purple haze, this feature launches. If you can see this symbol on the first reel, the 10, J, K, Q and A symbols will turn into Wilds. In fact, the Purple Haze symbol will act like a Wild symbol as well.  Another feature that can be activated in the main game is the Red Guitar Re-Spin feature. You need 4 or more Red Guitar symbols then. If you manage to collect them, the reels will re-spin once. If more Red Guitars appear, they trigger another re-spin. The feature ends when no more of this symbol appear on the reels.

Next feature of Jimi Hendrix Online Slot is the Pick and Click feature. You need Scatter symbols for this. This symbol is Jimi again with his precious guitar. This feature will be activated when 3 Scatters appear on the reels. However, in order to enjoy this minigame, Jimi should appear on reels 3, 4 and 5.  In this feature, you can win from 4 different wins. Coin wins, Crosstown Traffic Free Spins, Purple Haze Free Spins and Little Wing Free Spins. Only one of these can be won at a time. There will be a huge speaker. If you click on it, 4 different symbols can appear. If you can see 3 identical symbols, that prize will be yours.  Speaking of Coin wins, when you can see 3 coin symbols with Jimi's head on it, you will win a coin prize worth the bet multiplied by a number between 8 and 30.

If you thought it's the end of this article about Jimi Hendrix Online Slot, you are wrong. There are still more features! Next is the Purple Haze Free Spins. Collect 3 guitar symbols which is embraced by the purple haze to get 6-12 free spins. The classic 10, J, Q, K and A symbols will turn into Wilds. There is another feature related to free rounds: the Little Wing Free Spins. Land 3 of its symbol to get 6-12 free spins and 3-5 Wilds will appear randomly on the reels.

The Wild symbol is Jimi again and is a substitute for all symbols except Scatters. Other symbols on Jimi Hendrix Online Slot are for example the symbol of peace, lots of flowers, an eye, a vinyl...these add more to this psychedelic atmosphere. See the information for all combinations. Play with real money for more excitement. Play Jimi Hendrix Online Slot now!

Win with the elements on Fates and Furies slot machine

April 13, 2016, No Comments on Win with the elements on Fates and Furies slot machine