Jack and the Beanstalk slot machine 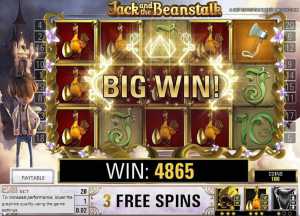 Jack and the Beanstalk slot machine game is one of the more creative games from NetEnt. It is a very well put together game. The visuals of this game are amazing. The graphics look almost like they were rendered with the intention of being in a feature film. The game starts with a lengthy intro that shows Jack stealing something. He runs out of the castle. He is shortly followed by a two headed purple giant. The animation then continues on with the chase until the the game appears. Then you are allowed to press play. You are then shown some of the symbols that can bring you bonuses.

Among the bonuses is the free spins. The free spins are triggered when you get at least 3 treasure chest symbols. When you get the treasure chests, then Jack appears and he climbs to another level where you get to start the free spins. The spins is where you can win plenty of money. There are plenty of symbols which includes the two-headed giant symbol, the key symbol, the poker symbols, the logo which is the wild card and some other symbols. Some of the symbols animate when you match them in the right combination. Also, when one of the paylines has a winning combination, the symbols light up before the reels are done spinning.

Jack and the beanstalk slot machine has 5 reels and 20 paylines. You have plenty of ways to win. You can also win a lot with this game. Besides the animation and the sound, the game is packed with some nice features that will make the game a fun and immersive experience for anyone that plays this epic NetEnt game. Like a beanstalk, this game stands head and shoulders above many of the other slot games. It is a very entertaining and generous game to play.

REGISTER NOW AND GET €100 FOR FREE   Are you excited about the European Championship? There is no need…